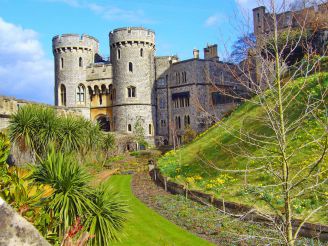 Windsor Castle is one of the residences of the British royal family. It is located in Windsor, the county of Berkshire, in the valley of the River Thames. The castle was founded by William the Conqueror in the 11th century. Since then, the residence has been an unshakable symbol of the British monarchy. During its existence, the castle repeatedly changed its appearance, was expanded and rebuilt. The castle is a favourite residence of Queen Elizabeth II. Windsor Castle is one of the oldest and historically significant sites of England, one of the largest castle complexes in the world. The Queen and members of the royal family spend a lot of time in Windsor, often used as a venue for hosting state visits.

Windsor Castle lives its own life, while anyone can visit and admire its royal splendour. On the vast territory of the castle complex there is the Chapel of St George and many apartments. The Round Tower, the oldest building in Windsor, is of particular interest. The tower is situated on the hill. Outstanding paintings and works of art are part of the castle’s interior.

St George's Chapel, the best example of the British Gothic architecture, is a chapel of the Order of the Garter, considered to be the highest order in the UK. Royal vaults are situated on the territory of the chapel. Another attraction of the castle is the Dolls’ House of Queen Mary, part of numerous exhibitions arranged in the gallery of the castle. A walk through Windsor Great Park is interesting too. In former times,this deer park was a private hunting ground. Beautiful sculptures can be seen there.

Windsor Castle is a significant historical site, one of the most popular attractions of Albion. It is open daily from 9:45 to 17:15, from November till February – to 16:15. Ticket price is about 18.5 pounds. In the castle, it is recommended to purchase an audio guide.

Windsor is located 34 kilometres to the west of London. From London, you can get there by train: from Waterloo Station to Windsor and Eton Riverside; also from Paddington Station to Windsor and Eton Central, changing in Slough. Also by coach: you should use Green Line Service from Victoria Coach Station. By car: M4 to Exit 6, M3 to Exit 3. Parking is available in the town centre.