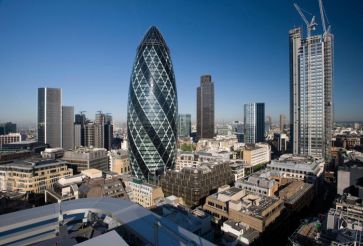 The contemporary skyscraper 30 St Mary Axe in London built between 2001 and 2004 is located in the financial centre of the city. Grid shell held on the supporting base was used when creating the building. The 40-story skyscraper is often referred to as the Gherkin due to its appearance and greenish tint of glass. Energy-saving methods and other systems are used in St Mary Axe, thus making it environmentally safe. The skyscraper has received the award from the Royal Institute of British Architects, as well as Emporis Skyscraper Award in 2003 for the best skyscraper in the world.

From the upper floors of the Gherkin, where restaurants are located, you should expect a sweeping view of the central part of London. Excursions in the skyscraper are not allowed.

The nearest underground station is Aldgate.